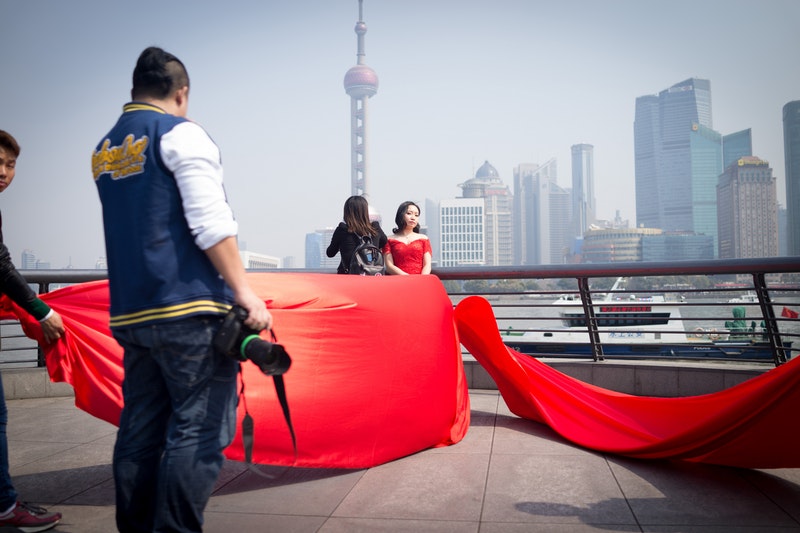 When is China Love set for release and where can we see it?

We launched in Sydney on 24 September and in Melbourne on 26 September, and in the coming months, we are doing the cinema-on-demand release through Demand.Film, which is a great way to get independent films out. The concept relies on people to reserve tickets online at selected venues, and once the demand has been met – tickets will be sold.

The project was successful in its application to the highly competitive Create NSW ABC TV Arts Documentary Feature Fund. Can you tell us about how you made this project stand out?

What made the project so attractive was that it was this lovely way of exploring China through this beautiful celebration of the colourful and unusual world of pre-wedding photography.

Olivia Martin-McGuire is a first-time film director, but her background is in photography. She has this gorgeous eye and lens on how she observes people around her. A lot of films that come out about China can be political or darker.

It’s also about where China has come from and where it is today – through the lens of this very quirky, colourful world.

How did you first come into the world of pre-wedding photography?

We were introduced. I’ve known Olivia for quite a while, but Madeleine Heatherton, the co-founder and business partner at Media Stockade, was teaching at the Australia Film, Television and Radio School. Olivia was doing a documentary course there and she pitched this story and Madeleine thought it sounded like a great story. Olivia showed us photographs of people getting their wedding photography done underwater, and suspended from the ceiling in really kitschy and quirky setups, and we thought, what’s going on here? We have to know more.

We were lucky enough to receive development funding from Screen Australia to do a pitch reel. We made it into the Pitch Factors and the Australian International Documentary Conference (AIDC). That’s when the ABC came on board and decided to pick it up.

The film is shot in an observational style. Can you elaborate on how you had that access to the subjects of the film?

It’s like any documentary really - building up relationships. Olivia together with the team in Shanghai, reached out to different people, communities and organisations to find the people that were willing to be followed for the documentary. One of the really lovely parts of the film is that it’s not just about young people getting married now.

We have one elderly couple who were married under the Cultural Revolution. No extravagance was allowed, so they had to get black and white passport photos as a record of their wedding. But now, 60 years later, these couples are getting dressed up in their wedding garb and getting their own photographs done, so it’s this really lovely full cycle. And the contact was made through an organisation that helps those elderly people heal from the wounds of their past.

Do you have any advice for someone thinking of applying to the Create NSW ABC TV Arts Documentary Feature Fund in the next round?

Because it’s the ABC Arts Fund, take a risk with exciting subject matters that are ‘outside the box’. ABC Arts are really doing some of the most exciting things on television. This Fund is where experimentation and opportunity is taking place. Make sure you’re presenting your idea well. Having an amazing sizzle reel or pitch reel is really important, along with your written materials. But also think of who’s telling the story. Having an artist and photographer as the director has brought a completely different lens, literally, to the subject matter, which is slightly different to what a regular documentary or drama director might bring.

Is there anything else you want to share about the film or the film’s production?

We just want people to go and see it. You struggle for years to make films and then you’ve got to inspire people to come along. We’re really proud of it. It’s a gorgeous, film, and we’re so lucky to have Demand.Film involved. We’d be so delighted for audiences across Australia to see the film and watch China in a completely different way. We hope to take away some of the fear that a lot of people have around China.

Now showing in cinemas across Australia. Buy tickets from Demand.Film.