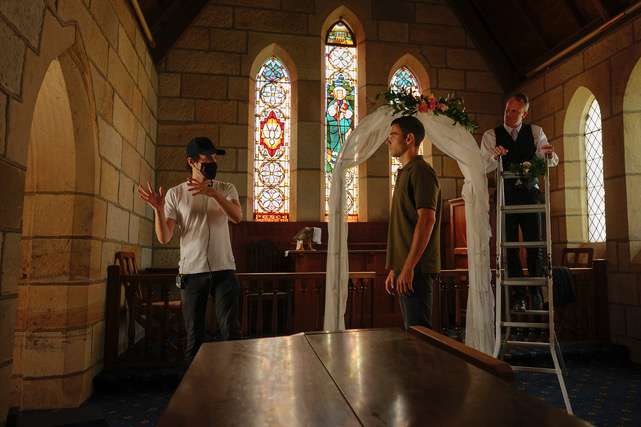 Emerging writer-director Steve Anthopoulos was motivated by his own experiences to create Voice Activated.

Steve Anthopoulos talks about how he came to work with an exciting cast of familiar faces to create his short film Voice Activated, which includes much loved actor Sam Neill, and Becky Lucas. Steve also shares useful advice for emerging screen creatives wanting to break into the industry.

Congratulations on having your film Voice Activated selected to screen at the 69TH Sydney Film Festival (SFF) part of the Screenability Program. How does it feel to have your film chosen to be on the big screen at such a prestigious film festival?

It’s surreal to be screening at the 69th Sydney Film Festival and premiering at the State Theatre – especially when I think about all the films I’ve watched there over the years. Even just seeing our page on the SFF website is a thrill!

Voice Activated tells the story of a passionate florist and deliveryman called Trent who has a stutter – and who finds his voice when he is forced to cooperate with a voice activated car. Can tell us a bit about where the inspiration for this story came from?

Funnily enough I got the idea in the middle of a 2018 Screenability screening for Stuttering - My Constant Companion,a documentary by Birgit Gohlke. The documentary was bookended by her search for a baby name that she wouldn’t stutter on. It was such a relatable, frustrating, and funny dilemma.

I was struck by the desire to capture something similar and decided to explore my struggle talking to Siri and other voice activated assistants. I remember Screenability programmer, Sofya Gollan, introducing the documentary and I love that it’s come full circle in this way.

Voice Activated features some well-known faces and voices, including Aleks MikiÄ‡, Becky Lucas and Sam Neill. How did they come to be part of the film and what was it like working with them?

It’s such a special cast and I feel so lucky to work with everyone. Aleks did a brilliant job. I found myself getting emotional watching his performance at each stage of production from self-tape to rehearsal, to the shoot itself. Becky Lucas is one of my favourite comedians and she’s pitch perfect.

Yes, we were fortunate enough to have Sam Neill lend his talents to one of our voice roles. I still can’t believe I got the chance to direct Sam Neill. He’d worked with one of the producers, Yingna Lu. He’d also stuttered as a child and felt strongly about the topic. It was so gracious of him to take part. His character’s introduction is probably my favourite part of the short and I can’t wait to show it to people.

While making Voice Activated you were mentored by Trent O'Donnell, who is a prolific creator of Australia’s most loved TV comedies, including No Activity. What did you gain from this experience?

Trent O’Donnell is someone I’ve admired for over a decade, he’s just so damn good at his job, so it was incredible to be able to meet him and get his advice. He was the first person I thought of when I was told I could ask for a mentor. He had so much great advice but honestly the biggest thing I gained was confidence from his encouragement.

What advice would you give to an emerging filmmaker living with disability wanting to break into the screen industry?

As an emerging filmmaker you can spend a lot of time between projects and my advice would be to make the most of that time to perfect scripts, treatments, look books, animatics, or any way to communicate your vision for a project in clear ways.

Filmmaking involves constraints – and time is one of the biggest. Once you get a big break the train starts speeding up. Before long you’re deep into pre-production and incredibly busy, so those communication tools you spent time creating come in handy. I know it’s easier for me to play an animatic than give a speech. I think this applies to basically any filmmaker.

Voice Activated is screening with Shadow at this year’s Sydney Film Festival, as part of the Screenability suite of films from Wednesday 15-19 June 2022. Get your tickets here

The Screenability Filmmakers Fund is part of a suite of initiatives under Screenability NSW, an open-ended policy commitment by Screen NSW to work with industry to grow participation in the screen sector by NSW-based filmmakers with disability. Find out more about Screenability here.