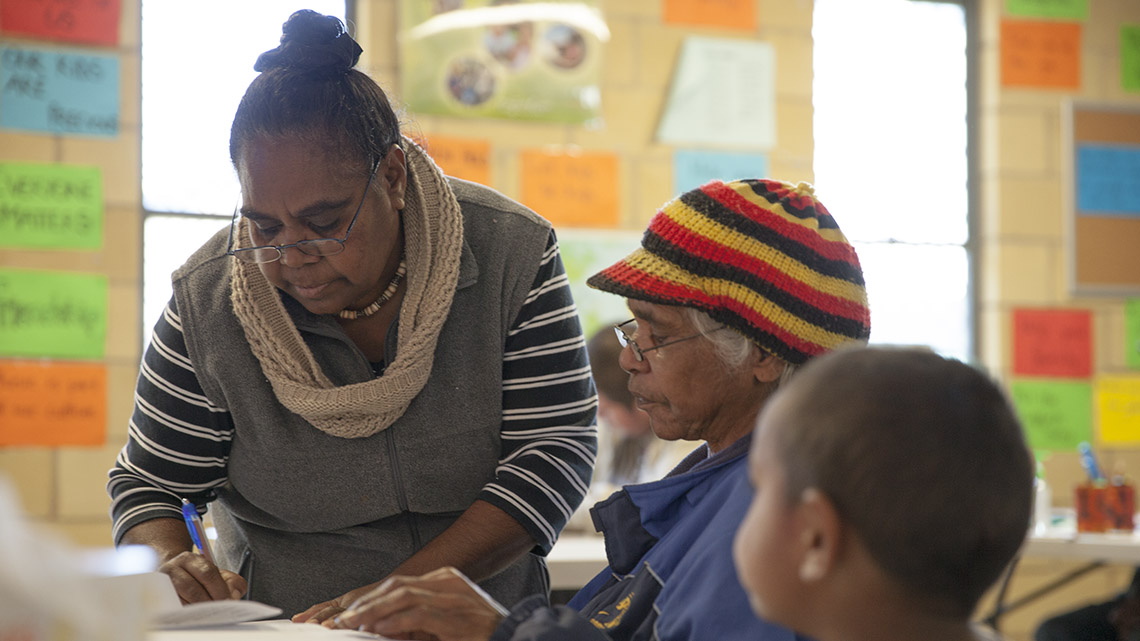 Interview with Erica Glynn - In My Own Words

Ahead of the World Premiere of In My Own Words, directed by Erica Glynn, we spoke to Erica about the raw and heartfelt film that is takes the viewer on an often-times funny journey of adult Aboriginal students and their teachers as they discover the transformative power of reading and writing for the first time. In breaking news, Erica was selected this week as the recipient of the David and Joan Williams Fellowship. The $50,000 Fellowship is intended to reward creative ambition, intellectual rigour and innovation in documentary cinema.

How did you come across the Literacy for Life Foundation and its work in the town of Brewarrina and why did you think this would make a compelling story?

For years I’ve rolled along accepting the fact that way too many of my Aboriginal family, friends and colleagues struggle with basic reading and writing or can’t read and write at all. About five years ago a nagging need to discuss the issue, up front and on screen, began to grow. I didn’t know exactly how I would do it but my first bit of research - a Google search - immediately revealed the work being done by the Literacy for Life Foundation (LFLF). The fact that they were moving into towns out in North West NSW, setting up classrooms, and offering Aboriginal men and women an opportunity to learn to read and write instantly gave me a way to discuss it. All the right ingredients were there.  An active, experienced program, that was taking place in communities, which were not represented enough on our screen. An added bonus was that LFLF were using a Cuban method in Australia. You couldn’t help but be intrigued about why this was happening.

The documentary is observational in style and it uses narration and interviews with key participants. Why did you decide to use these techniques to tell the story and how did you get its subjects to trust you and forget the camera was there?

Giving audiences the opportunity to get to know some of the Aboriginal men and women, and a little about their lives beyond the classroom was paramount so fly in and fly out filmmaking was never going to allow me to do that.

Brewarrina is not my community, I’m from Alice Springs, and being an Aboriginal filmmaker working with Aboriginal subjects doesn’t give me a magical key to unlock access. I needed to take time, be patient, and allow people to get to know me before I started to take bits and pieces of their personal lives on screen.

Maybe it marks me as a low-level doco maker but the notion that ‘subjects, forgetting the camera was there’ was very pie in the sky in this instance. These are very clever and switched on people, who didn’t, for an iota of a second, forget that the camera was on them. And rightly so! They had agreed to expose what they had successfully kept hidden for most of their lives. They knew every move we were making, and so did everyone else in town.

The film mainly follows Mary, the class organiser, and Clarence one of the students. Can you share with us how you chose these two subjects to centre the story around and did you select them from the outset?

Mary was always going to be one of the major subjects, firstly because she is the conduit between her community and the LFLF, and also because she was on her own learning journey as a coordinator. But in a bigger and more vital way Mary is a very special person.  She radiates truth, warmth and integrity. I think audiences love meeting and hanging out with people like Mary. I know I do.

With Clarence it was a slightly different story. I met him during research and I think my probing got a little too close to the bone. There were things about his lack of literacy he hadn’t ever really talked about with strangers. In an effort to get rid of me he said ‘look, when you come back with the cameras I’ll tell you everything, I’ll even dance for yah.’ I took him up on the offer and on day one of class we turned up on his doorstep at 6am in the hope of filming him getting ready for school.  He rolled his eyes and let us in.

How much involvement did the local Aboriginal community have in making the documentary?

Lots!  We couldn’t have made the film unless we had their endorsement and support but as is typical in all filmmaking some people are happier than others to have a camera hanging about. It was made very clear very quickly where to point it and where not to.

In Australia funding a documentary can be challenging, and you shot this film over a 13-week period. Can you tell us how it was shooting over that time and how did you secure funding?

Having a top-shelf producer, like Darren Dale at Blackfella Films, was pretty central.  Also having the backing of NITV, Screen NSW and Screen Australia, was also crucial. They all knew, right from the get go, that a good old observational documentary was the best way to go. I feel very privileged because before Darren came on board, just after the first stage of development, I didn’t think making it this way was possible. It definitely was the right way, for this particular story, in this particular community.

The biggest insight for me – that with the right support people can achieve amazing things and that organisations like the LFLF who are tenacious in their efforts to get that support right need support themselves -  they run on the smell of an oily rag doing intakes a town or two at a time.

I know they, like the Cubans, believe that to make a significant difference running programs en masse across the country, is the way to go. As Jack Beetson, Head of the LFLF Foundation often says, ‘it’s not their fault they haven’t learnt to read and write, it’s ours.’

Is there anything else you want to share with us?

Yep! Grab your tissues, because along with having a few laughs you might shed a tear or two