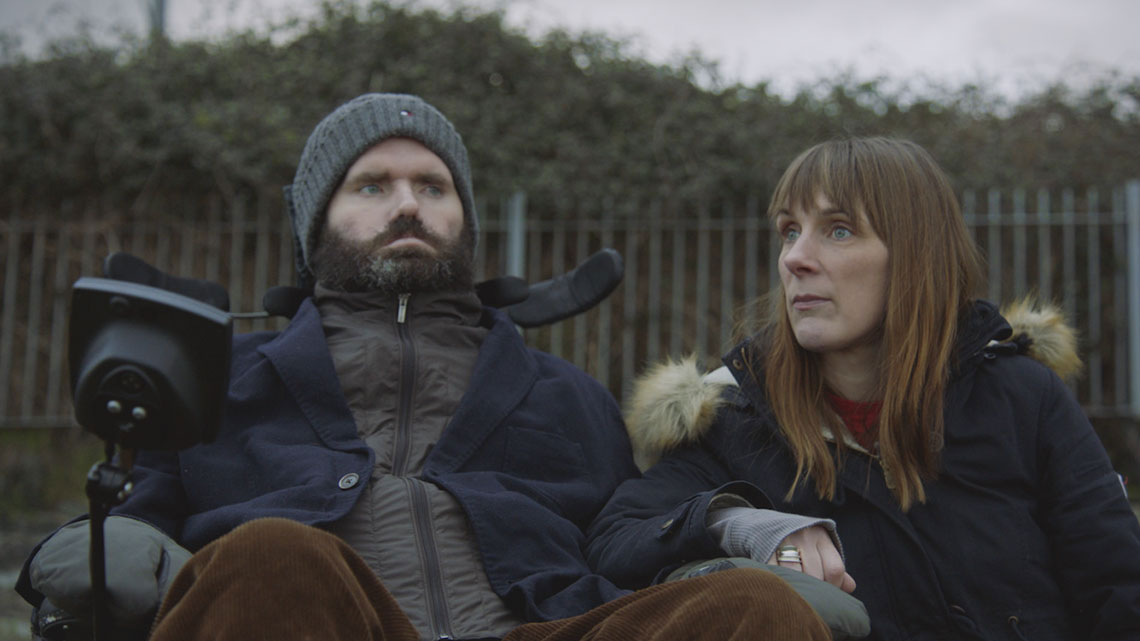 Interview with Frankie Fenton – It’s Not Dark Yet

It’s Not Dark Yet - Simon Fitzmaurice was 34 years old, his short film had just premiered at the 2008 Sundance Film Festival, and his third child was on the way. When doctors gave him just four years to live, Simon, his wife Ruth, and kids took an intended six-week trip to Australia, and stayed for six months. Seven years later, Simon's lost all mobility, and can't speak or breathe without artificial help. Ever defiant, he plans to direct his debut feature. Using eye gaze technology and a computerised voice, Simon finishes his script, finds supportive producers, crowd funds, storyboards and auditions. The outcome of his dogged persistence is an inspirational feature, My Name is Emily, screening in the Festival's Screenability program.

How did you come across Simon Fitzmaurice’s story?

I’m from a small town called Ardee nestled directly between Belfast and Dublin on the east coast of Ireland. It just so happens that Ruth, Simon’s wife is from Ardee too. In fact she is my sister’s best friend. I would have heard about Simon’s flowering film career, and later on his shattering diagnosis, from my own family over the years.

Some time later Kathryn Kennedy, one of the films producers, who was in the process of producing Simon’s film, My Name Is Emily, alongside Lesley McKimm thought that the story of Simon, the first person to direct a feature film, using eye gaze technology, needed to be told to the greater world. They approached me to direct a documentary about his incredible journey.

What made you believe that Simon’s story would make a good documentary?

You only need to hear the premise of this story to know how important it is that it gets documented. I was in fact already shooting the documentary when I learned he had written his book titled It’s Not Yet Dark. We filmed the book launch, which in fact features in the film. The book is a beautiful piece of work, masterfully written with his eyes and now getting released all over the world in many different languages. It hits your heart with an almighty thump of love and sincerity that reaches directly into the question of what it is, to be alive. It became quite clear that it should inform the spine of our story.

The documentary is an intimate look into Simon’s life, how he became a filmmaker, his relationships and how he and his family dealt with his diagnosis of Motor Neurone Disease (MND). Prose written by Simon is used within the documentary and Colin Farrell narrates it, which is quite a powerful artistic choice to make. Why did you decide to use the tools to tell the story and how did you get Colin Farrell onto the project?

Colin has been a friend of Simon’s for some time so getting him on board was quite straightforward. I had many ideas on how to communicate his story and ultimately it felt to us the best way to tell it was in using his own words. This would be underlined by the people directly involved in his experience, namely his close family and friends. I think the idea of having one of the most talented actors on the planet portraying his voice somehow appealed to Simon somehow, so we were very glad when it felt like it was working on screen.

What made you want to have testimonial interviews?

In documentary the story telling perspective is key. It’s important to keep open minded to opportunity. You will never know how your story is going to end up as it’s clearly a vagrant molding process rather than a stringent plan consistently adhered to. It made sense to hear the family, as they are such a huge part of Simon’s story and an element with which the story could not, to my mind, be fully told.

The documentary uses beautiful metaphors and imagery to narrate its story. Can you share with us how you developed your choices for the film?

It became clear that much of what Simon speaks about is the feeling of his experience. His thoughts are deep and elaborate and to my mind something experiential and heartfelt rather than literal. To explore those feelings visually becomes a major part of the creative process and I was extremely lucky to have such a technically expert creative team around me to help translate some of these ideas. In particular our creative producers who were brave enough to let some of these ideas to go ahead and to give their own experienced input. Kate McCullough our cinematographer was able to sink her teeth into the project and produced incredible pictures that permeate the films feeling of Simon’s experience. And those married with archive from editor Dermot Diskin gave a pace and direction to the film which we simply would not have without the skills of the creatives involved.

The film balances different perspectives delicately and intentionally. How did you ensure that this would be achieved?

We tried to be as honest as possible and stayed true to the story they were telling. Luckily our subjects were very articulate and open about their experiences, which really helped.

Can you share with us how you funded the documentary?

We had great support from our very own Irish Film Board, which we’re so lucky to have in our home country. They jumped on board from the get go having already supported Simon’s film My Name Is Emily. The film Board lends support, advice, help and finances at most stages of the film making process so we truly feel blessed to have them. We also had support from The Wellcome Trust in the UK, Tobii Dynavox, who provided Simon with his communication screen, and of course TV3, a very supportive Irish broadcaster.

What was the biggest lesson for you in making this film, from either a filmmaking or personal experience?

I took inspiration from Simon and I thought ‘big’. Go for the out-of-reach ideas and if you get a quarter of what you wanted you’ll be happier than you knew possible. I think also its important to just be persistent. It’s like what Ruth says in the film, if you were to look at taking on MND from where they are now, it just wouldn’t happen, there’s just too much. But if you just take it one day at a time, you’ll get there in the end. I think this applies to everything, all tasks in life and especially film making. Never give up. I can hear Simon saying that, ringing in my ear every day!

For more on the film and Simon’s story follow these links:  https://www.itsnotyetdark.com/press/